skip to main | skip to sidebar


The City Concealed: Tombs & Catacombs of Green-Wood Cemetery from Thirteen.org on Vimeo.


And, I've a friend who lives in NYC- I've got to convince her to go to this cemetery for me for Tombstone Tuesday!
Posted by Mopsie Marilisa at 2:33 PM 5 comments:

The Coyote and My First Tombstone Tuesday 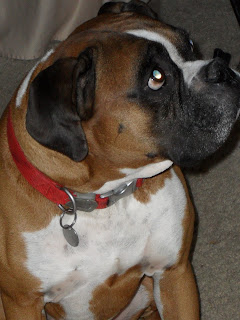 Do you ever have this sense of forboding? I knew I wanted to do Tombstone Tuesday today but felt uncomfortable to go, with all the bravado I usually try to exhibit, to the cemetery by myself.


I know, I'll just take Emerson! This is my Boxer who actually has no idea he might be a dog.


However, it didn't even feel right to take him either, so I devised another plan.


I told Tony I needed to go to the pharmacy: True.
To pick up two items: True.
And then just pop by the cemetery on the way: True.


This is what I saw when I arrived at Old Hall Cemtery. 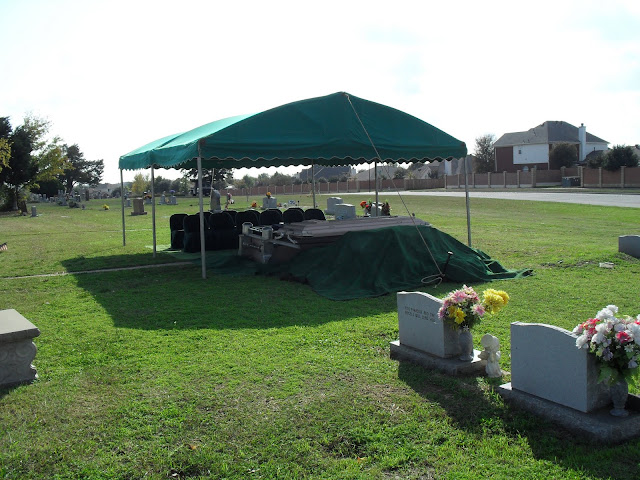 I feel ashamed of myself because I actually said, "Score!" only because I think it's very interesting how they install a vault and a casket in the ground.

However, seeing the name on the vault, Helen Boston- made me feel sad for her... 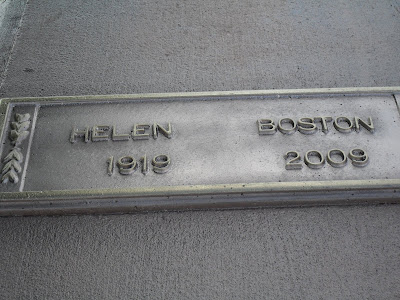 and her waiting family... 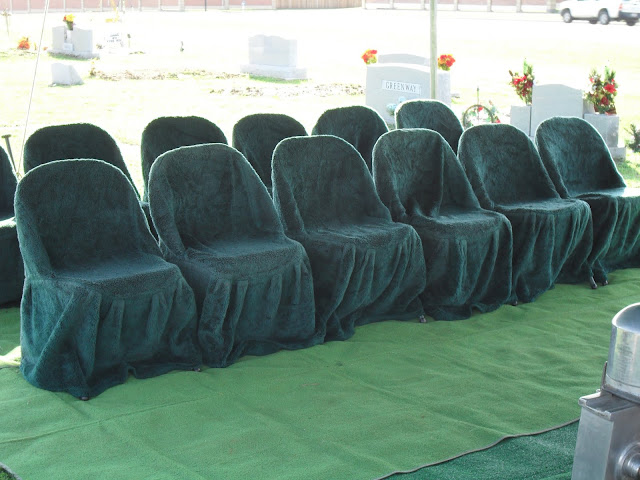 and the last vestige of flowers she would ever receive... 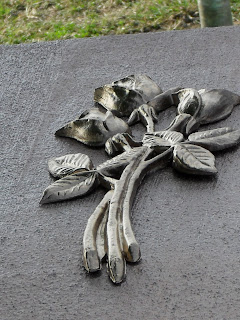 and the stark reality of this truck's somber job... 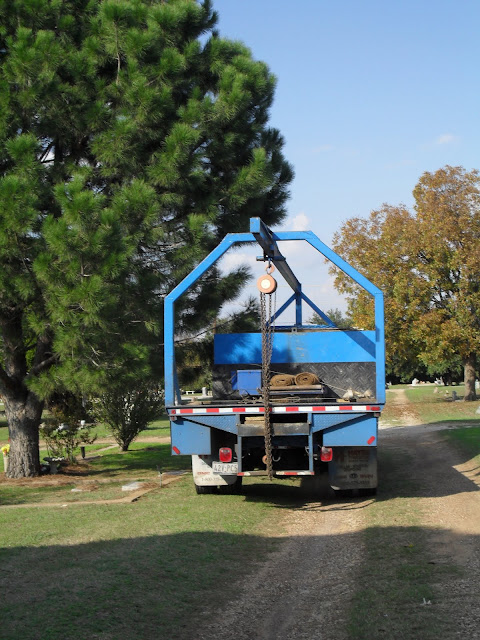 This was made even more real today as my General Manager just lost him Mom last night. That woman could be Michael's mother. But no, it was Helen Boston, born in 1919.

As I went through the cemetery and saw a man I had never seen before... 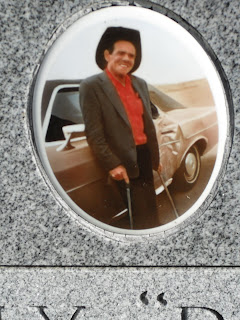 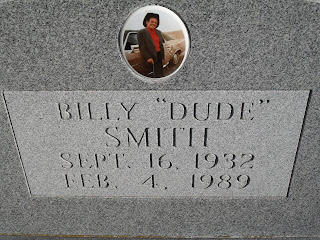 But between Helen and "Dude", I began to distract myself with some signs of fall... 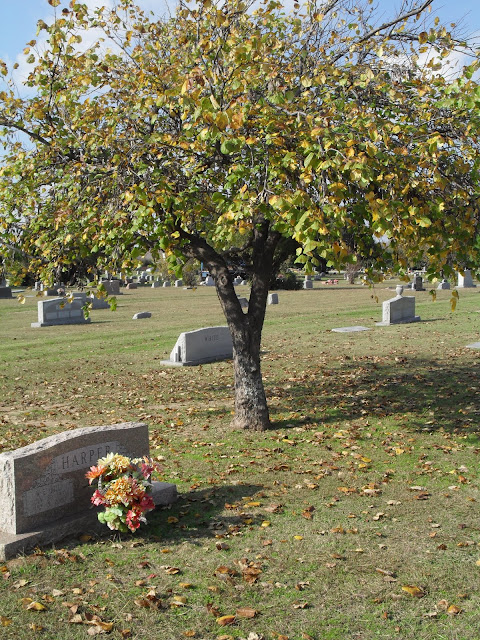 When, what do you think but Mr. Crafty Coyote appeared?!

My husband began loudly and repeatedly honking the horn over and over. In the cemetery!

"Are you crazy? What's wrong with you?" I demanded.

This coming from the same man who, when I say, yes, I'll be ready in 20 minutes and am certainly not, merely waits patiently for me and utters, ne'r a word.

"I was trying to warn you- to get you in the car!"

And that's why my two beautiful flowers growing defiantly out of this grave, are blurry! 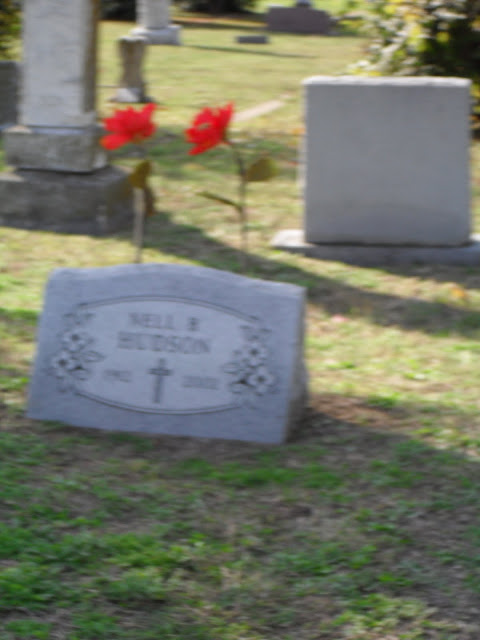 Now, can you imagine if I had taken my Boxer instead? My Boxer who tries unmercifully to mix it up with everything on paws?

What a fine initiation into my first Tombstone Tuesday!

Today is "The Day of the Dead"- I Did NOT Know That!

Day of the Dead - Wikipedia, the free encyclopedia: "Many people believe that during the Day of the Dead, it is easier for the souls of the departed to visit the living. People go to cemeteries to communicate with the souls of the departed, and build private altars, containing the favorite foods and beverages, as well as photos and memorabilia, of the departed. The intent is to encourage visits by the souls, so that the souls will hear the prayers and the comments of the living directed to them. Celebrations can take a humorous tone, as celebrants remember funny events and anecdotes about the departed.[3]"

I'm wondering if I go to the cemetery today, will I find people, Mexican people, visiting graves of their loved ones?

Though I do not agree with "praying for the dead" and trying to speak to the departed- yet I do think it is very important to remember those who have died and to plan some sort of remembrance for them.

Arguably, the whole Association of Graveyard Rabbits do thus.

Cheating a Little On Tombstone Tuesday- but it really IS Tuesday! 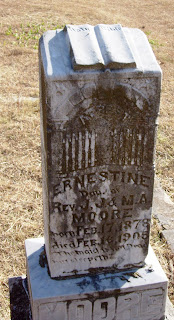 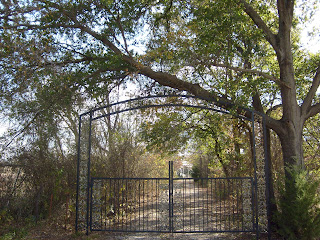 Okay, everything is getting all lined up.

It rained so much the last few days here in Texas, that the cemetery would simply be covered in mud... so- I'm forging ahead nonetheless.

The first picture above is that of my Great Aunt Ernestine. I swiped this picture of her grave from some gracious and kind soul who was already visiting her cemetery when it was, apparently, not raining.

Let me tell you about Ernestine. Ernestine was sister to my grandmother- and yikes, before you get the idea that I'm very old- I want you to understand that all the women in my line of mother's had each other at the age of 38 or older. Therefore, (she said in her vanity) though Ernestine was born in 1878 which was one hundred and thiry one years ago- I myself fall into no such classification.

Moving on- the curious thing about Ernestine was, for quite some time; I knew she had died here in Lewisville, but I could never locate her grave!

She is not buried with my other family members. I went around asking for a good two years, but WHAT did they do with her?!

The internet can be a wonderful place. When I googled her- there she was~ which lead me not only in finding her, but this very historic cemetery, Smith Cemetery, which I will be writing a great deal about.


Posted by Mopsie Marilisa at 11:55 AM No comments:

A Poem in Memory of Bryan 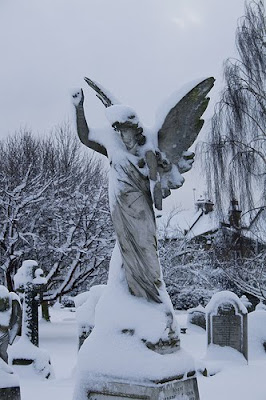 I sent this poem, by Lowell, one of my favorite poets and social critics, to my ex sister-in-law, Linda. I sent it because, my brother's only child, Bryan, had tragically died of an overdose last June 29th, 2008. In Lowell's time, the heartbreak of losing children was common place back in the 1800's. The heartbreak of losing children to drugs, and not disease, is common place in the 2000's. So very sad.
The First Snowfall

by James Russell Lowell
The snow had begun in the gloaming,
And busily all the night
Had been heaping field and highway
With a silence deep and white.

Every pine and fir and hemlock
Wore ermine too dear for an earl,
And the poorest twig on the elm-tree
Was ridged inch deep with pearl.
From sheds new-roofed with Carrara
Came Chanticleer's muffled crow,
The stiff rails were softened to swan's-down,
And still fluttered down the snow.
I stood and watched by the window
The noiseless work of the sky,
And the sudden flurries of snow-birds,
Like brown leaves whirling by.
I thought of a mound in sweet Auburn
Where a little headstone stood;
How the flakes were folding it gently,
As did robins the babes in the wood.

Up spoke our own little Mabel,
Saying, "Father, who makes it snow?"
And I told of the good All-father
Who cares for us here below.

Again I looked at the snow-fall,
And thought of the leaden sky
That arched o'er our first great sorrow,
When that mound was heaped so high.

I remembered the gradual patience
That fell from that cloud-like snow,
Flake by flake, healing and hiding
The scar of our deep-plunged woe.

And again to the child I whispered,
"The snow that husheth all,
Darling, the merciful Father
Alone can make it fall!"

Then, with eyes that saw not, I kissed her;
And she, kissing back, could not know
That my kiss was given to her sister,
Folded close under deepening snow.
Posted by Mopsie Marilisa at 10:52 PM No comments:

Did I Mention I was Blond?

Because really, only someone very blond would pull something as absent minded as this-
My friend wanted to go, about 10 years ago, to check his father's headstone, see whether or not it had been laid.
After parking and viewing his father's grave; we started innocently wandering from his truck. This particular cemetery was vast and quite expansive in it's beauty and history. I was completely enthralled and wanted to explore and explore and explore...
The sun had begun to set. We kept reading graves and going over bridges with ponds and lovely, royal swans swimming peacefully... I remember those swans; it grew darker. And darker. And dark. We started heading back.
But as we did, millions of fireflies, noiseless and stunning, made their way around the cemetery like little green phantoms. They were everywhere~ breathtakingly beautiful.
But alas, we had stayed too long! The gate was locked. We tried another. Locked. Another... locked! Locked in the cemetery at night with no way out.
I wasn't scared, I would not go that far- but I wasn't comfortable either. You know? Just a leetle unsettling.
Like a couple of dopes, the only thing left to do was knock on the cemetery's funeral home, as one was adjacent to the property, and tell them what a couple of oafs we are and could they let us out please?
They said after over 25 years in the funeral business, they'd never seen anyone locked in the cemetery after dark before.
I did mention my hair color, right?
Posted by Mopsie Marilisa at 3:54 PM No comments:

We can't go to the cemetery tomorrow as we planned because of all the rain we had today. I was looking forward to it- me and my friend, Susan.

It's just going to be far too muddy.

I do have a little confession. How I said before I'm not afraid to go to cemeteries.. not even in the dark. Well, this one that we are going to has {{{gasp}}} snakes! I know because we saw a huge one last time, which I really didn't see as it scurried quickly under a large pile of wood that had been cut down from the overgrown tree branches.

Normally, I don't mind snakes. But big, huge, whopping Oh-My-G0d-Did-You-See-That?! snakes; not so much.

Also, this particular cemetery is very old- 1862- and has all but been abandoned at one time. It sits very far back from any life- it has a gate and a road that leads up to it, which, if you were to walk, you'd think you were in one of those horror movies. I promise you, you would.

And one last thing. I want to tell you a story about the last time I was there. Something caught my eye and it was over to my left as I squatted down on my knees to better read a grave. As I was learning this man came all the way from Denmark in the 1800's, and what do you think? A bone. Not an animal bone! It was a bone from a human vertebrae- a back bone. I didn't know if I should leave it or take it. Leaving it seemed wrong and taking it seemed wrong.

I decided after much moral and ethical debate as to what the proper thing to do was- I did take it. I gave it to my friends who own a mortuary, you know, to show them and they said, yes, this is human all right. Nonetheless, they said the DNA would be so extremely old, there's really no way of knowing who the bone belonged to; so I kept it, which posed numerous complexities for me as I'm highly organized... I don't happen to have a "bone collection".

I found a little grey glass case with soft sides, and there it resides in my upper left kitchen drawer. Waiting.. Ha.
Posted by Mopsie Marilisa at 4:28 PM 2 comments:

This is me- Mopsie Marilisa

Elsewhere better known as Entrepreneur Chick- click my pic 2 check it out!